I purchased my first meteorite and tektites in the early '90's and that initial thrill of holding a chunk of rock
that had prior to a firey entry through earth's atmosphere, zoomed through space for countless zillions of
years still hasn't faded. Of all the specimens in my rock and mineral collection, these hold first place. 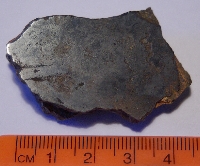 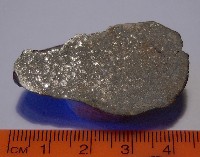 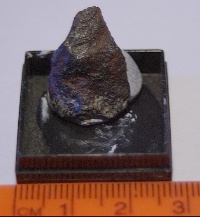 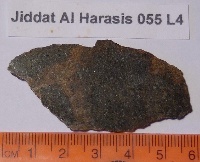 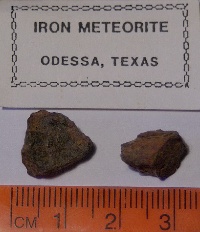 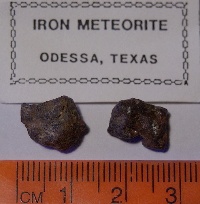 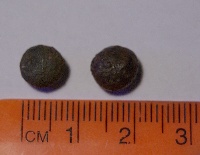 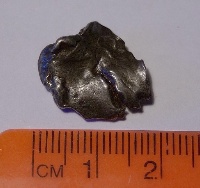 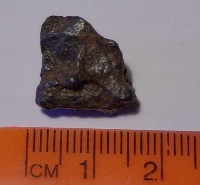 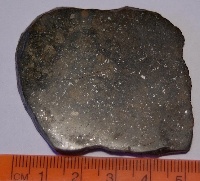 These last 3 images are of 2 sets of Tektites and a Molvadite (the rarest of Tektites)
Left - Tektites, Thailand, Centre - Tektites, Australia, and Right - Moldavite, Bohemia, Czech Republic 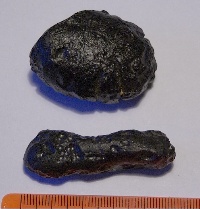 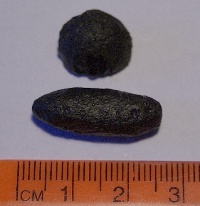 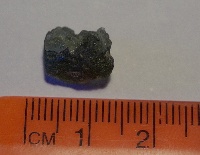 Specimens - 002, 015
Northwest Africa (NWA869).
Weights: 002 - 21g, 015 - 30.1g.
This write-up was originally printed in Meteoritical Bulletin 90: ©Meteoritical Society
Find: 2000 or 2001, Ordinary chondrite (L4 - 6)
History: It is quite clear that meteorite collectors in Northwest Africa have discovered a large L chondrite strewn
field at an undisclosed location. At least 2 metric tons of material comprising thousands of individuals has been
sold under the name NWA 869 in the market places of Morocco and around the world. Individual masses are
known to range from <1 g to >20 kg. It is certain that NWA 869 is paired with other NWA meteorites, although no
systematic survey has been done. It is also possible that some stones sold as NWA 869 are not part of the same
fall, although dealers are confident that most of the known masses are sufficiently distinctive from other NWA
meteorites in terms of surface and internal appearance that the error rate should be fairly low. Scientists are
advised to confirm the classification of any specimens they obtain before publishing results under this name.
Petrography and Geochemistry: (A. Rubin, UCLA) A fragmental breccia of type 4–6 material; one thin section
dominated by an L5 lithology gave olivine (Fa24.2).
Classification: Ordinary chondrite (L4 - 6); W 1, S3.

Specimens: - 006, 007
Nantan County, Guangxi Prov., China Weights: 006 - 11g, 007 - 3g., Composition: Iron 92%, Nickel 6.96%
Fall:1516, Found:1958
A meteorite shower was distributed over 30 square kilometers. It is reported to have fallen in 1516AD : "During
summertime in May of Jiajing 11th year, stars fell from the northwest direction, five to six fold long, waving
like snakes and dragons. They were as bright as lightning and disappeared in seconds.". In 1958, the "iron ore"
would not melt at the backyard steel factory. The inhabitants send some to the scientists who determined they
were meteorites.

Specimen: - 011
Sikhote-Alin Mountains, Primory, Russia
Fall: Feb 12th, 1947
Total Fall Weight recovered: >900,000kg, This Specimen: 10g
The Sikhote-Alin meteorite fell during daylight on February 12, 1947. Witnesses reported a fireball that was brighter
than the sun. It came from out of the north -- about 15 degrees east of north and descended at an angle of 41 degrees.
It left a trail of smoke and dust that was 20 miles long and lingered for several hours. Light and sound of the fall were
observed for two hundred miles around the point of impact. Painter Medvedev was a witness of the fall and quickly
painted a picture. The speed of entry was estimated to be 14.5 kilometres per second. As the meteorite entered the atmosphere some
of it began to break apart. The group of fragments fell together. When the descending group of meteorites reached an
altitude of about 4.5km, the largest mass apparently broke up in a violent explosion. This was a very low altitude for
such an event.
In 1975, an expedition did a map of the strewnfield. Mapping of the craters and meteorites found in the earlier trips
showed that the meteorite came from the NNW to the SSE. However, eyewitnesses reported it coming from the
NNE to SSW. It was believed lack of accurate eyewitnesses and the wind blowing the smoke tail made up for the
difference. Tsvetkov, who joined the expedition, believed otherwise. Mapping had been done with great effort to
search the known area, looking metre by metre, being careful not to skip any spot. Tsvetkov chose to search 20 -
25 metre grids each separated by 200 metres. To the surprise and possibly annoyance of his superiors Tsvetkov
shortly found meteorites well outside the known strewn field.
The fragments scattered over an elliptical area of about a half a square mile. The largest fragments made small
craters and pits. One of these measured 85 feet across and 20 feet deep. The larger craters are located at the far
end of the strewn field. They are estimated to more than 100 craters.

The Last 3 sets of images show's my tektites. Tektites are not meteors as such, rather they are a
by-product of a large meteor impact. We are talking about LARGE impacts, those resulting in craters of
many km's in diameter. The resultant energy release of such an impact, melts quantities of the earths
crust and ejects that molten rock high into the atmosphere, sometimes to the edge of space. It cools
rapidly and falls back to earth with a fiery re-entry that cuts grooves into the surface of the object.
Because of the rapid cooling tektites have a black glassy appearance much like volcanic glass
(Obsidian). Being material of the earth's crust, their composition is primarily silica SiO2 .

Moldavites are by far the most beautiful and rarest of the tektites. They are the only gem quality
tektite, displaying a transparent emerald-green colour and are often used for jewellery. They are
found only in Bohemia, Czech Republic.